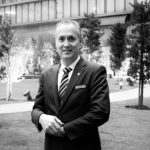 Mark is a Dutch national and long-time Marriott International team member. He joined the JW Marriott team in Hanoi earlier this year and joined the AmCham board this spring. Mark began his Asia hospitality career at the Hilton in Shanghai and then spent four years starting in 1994 as part of the pre-opening team of the Hanoi Daewoo Hotel and Daewoo apartments in Hanoi. He then joined Marriott International, helping run The Ritz-Carlton, Millennia Singapore, the JW Marriott Hotel Chongqing, the JW Marriott Tomorrow Square Hotel & Marriott Executive Apartments in Shanghai, and the Renaissance Mumbai Convention Centre Hotel and Marriott Executive Apartments in India.

Mark is passionate about Corporate Social Responsibility projects to support the Vietnamese community as well as to develop local talent for the service and hospitality industries. Vietnam is Mark’s “second home country”. He lives in Hanoi with his Vietnamese wife and two children and he is often spotted on the local soccer fields or jogging around the West Lake area on weekends.